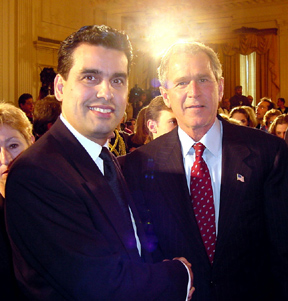 It’s something you won’t hear about in the mainstream media. A loud, devastating explosion in the sub-basement of the World Trade Center’s North Tower BEFORE the impact of an airplane that hit between the 93rd and 99th floors.
That was the account of William Rodriguez, who was a 20-year employee of the World Trade Center when the towers were destroyed on Sept. 11, 2001. He was later hailed as a national hero for pulling people out of the buildings, saving a number of lives that morning. He was believed to be the last person to escape the North Tower before it fell. He was even photographed with President George W. Bush. Now, the government doesn’t want to hear anything he has to say.
No matter how well known he is within the 9/11 Truth movement (in fact he’s one of its best known figures), very few others have heard the things he has to say – things that make the purveyors of the official story very nervous.
That’s because if what he reports is true, then the official story can’t be. That official version contends that airplane impacts and the resulting fires were solely responsible for the collapse of the twin towers. But if his account of END_OF_DOCUMENT_TOKEN_TO_BE_REPLACED 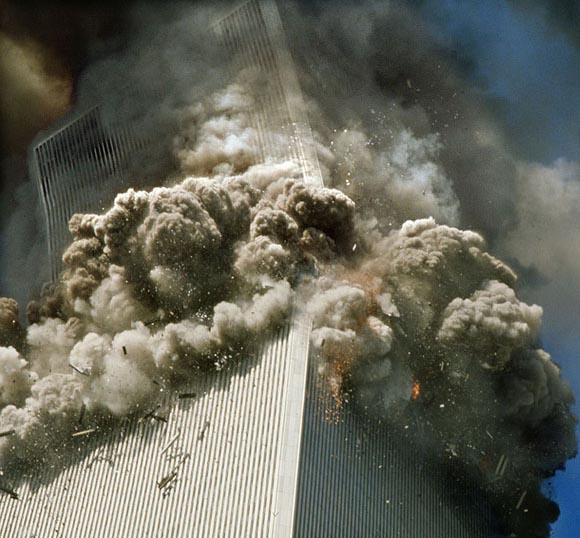 People who believe in the official government theory of what happened on Sept. 11, 2001 must find the laws of physics to be a real pain in the neck. They must hate it when these silly laws keep showing how their neat story of Islamic terrorism simply isn’t possible.
There are so many examples: the too-small hole in the Pentagon and lack of wreckage outside; the scattering of debris from Flight 93 over an area of several miles and virtually no wreckage at the crash scene; molten steel under the three World Trade Center towers that came down; the fact that fire was simply not hot enough to have brought down both of the twin towers; and that they couldn’t have been destroyed so quickly without explosives. And those are just the big ones.
There’s another aspect to the destruction of the twin towers that doesn’t get as much attention but that is huge when it comes to proving the fiction of the official theory.
When the destruction of the South Tower started at 9:59 a.m., just 56 minutes after it was hit, the top of the building began to tip over (as you can clearly see in the photo above). And, according to Sir Isaac END_OF_DOCUMENT_TOKEN_TO_BE_REPLACED

The goal of education is to replace an empty mind with an open mind – Malcolm Forbes
People are very open-minded about new things – as long as they’re exactly like the old ones – Charles Kettering
November 24, 2010

It’s all about assumptions – that immovable foundation of ideas we won’t compromise under any conditions even when those ideas are proven wrong. These are the dogmatic beliefs that block us from considering new possibilities.
We all have biases. We all operate with a set of core beliefs about how the world works. We all see things through the filter of our upbringing and our experiences. But truly wise people are those who realize the limiting effects of their biases, and who will consider new information even when it contradicts their existing beliefs.
The 9/11 Truth Movement was born as a result of people who were willing to look beyond the obvious. They didn’t take what they were told as unchallengeable truth; they used their brains to evaluate what they were told and what they saw. They tested the information critically.
Most people think they are completely open to new ideas and concepts; but they aren’t. They don’t apply the same criticism to the “official conspiracy theory” of 9/11 that they do to others they don’t like. END_OF_DOCUMENT_TOKEN_TO_BE_REPLACED

It’s an inspired move. Take a single event from 9/11 and ask for a local investigation to determine how it happened. In this case, the goal is to have officials in New York City launch an investigation into why World Trade Center Building 7 collapsed on Sept. 11, 2001.
The smaller scope makes it more likely to succeed, and the fact that New Yorkers are asking their city to investigate leaves the federal government out of it – for now, anyway. And it’s clear that other so-called investigations into this event have shed no light on how this 47-storey building came straight down at near free fall speed (6.5 seconds) when it wasn’t even hit by a plane.
The campaign, called Building What?, was organized by families of people who died in the Sept. 11 attacks. It is co-sponsored by NYC Coalition for Accountability Now and Architects and Engineers for 9/11 Truth, an organization that includes more than 1,200 members. AE911Truth is devoted to the dissemination of scientific evidence about what happened on 9/11. Their stated goal is a truly END_OF_DOCUMENT_TOKEN_TO_BE_REPLACED

This CIT image, suggesting that a 757 flew over the Pentagon, would never be shown on 9/11 Blogger.

I have to admit that when I started writing about the so-called terrorist attacks of Sept. 11, 2001 just three months ago, I was somewhat naive. I thought that everyone who doubts the official story about 9/11 would be working towards a common goal.
Now, I’m not so sure.
I am sure that there are thousands of sincere people around the world who feel we’ve been conned and who don’t want to let it happen. What has come to be known as the 9/11 Truth movement is made up of many educated and intelligent people who know that the official story is impossible on hundreds of different grounds. Without people like David Ray Griffin, Barrie Zwicker, Richard Gage, Mark Gaffney, Dylan Avery and others, we’d be nowhere.
But the online world of 9/11 discussion and debate has a dark side. And this comes in the form of web sites that censor certain views and online “contributors” who ridicule certain beliefs about what happened. They don’t refute them, they just dismiss. Reminds me END_OF_DOCUMENT_TOKEN_TO_BE_REPLACED 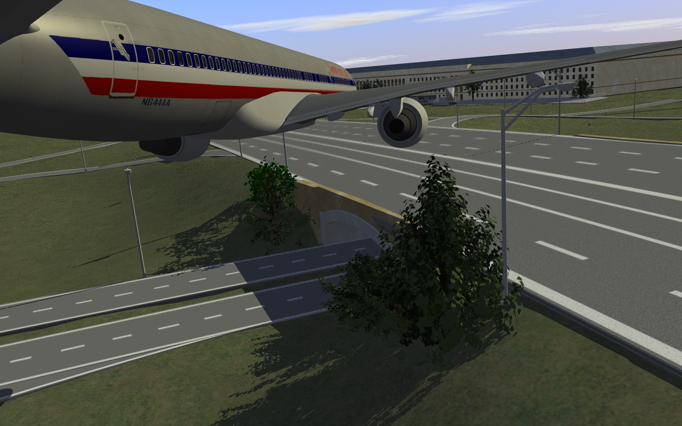 It seemed that they would confirm for the world that a Boeing 757 hit the Pentagon on Sept. 11, 2001 just as the government said. But they might just have done the opposite.
“They” are the five light poles that lay on the ground after allegedly being knocked over by Flight 77 in the seconds before it is supposed to have hit the Pentagon.
The reason the existence of these poles is helpful in questioning the official story is that they provide us with an exact flight path that the plane would have to have taken if indeed it hit the building. If the flight path had deviated even by a small amount, the plane would not have hit these poles.
So is it possible that the actual flight path was different from the one outlined in the 9/11 Commission Report? That may depend on who you believe. The film National Security Alert by Citizen Investigation Team makes the case that the plane that people saw flying near the ground END_OF_DOCUMENT_TOKEN_TO_BE_REPLACED 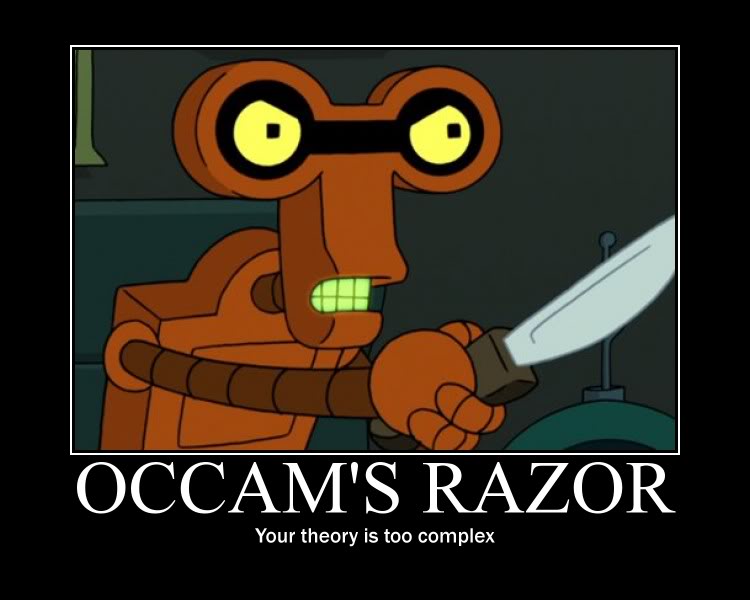 Conspiracy “debunkers” have a number of weapons at their disposal to discredit those who try to expose deceptions and cover-ups.
They will often condescendingly brush aside what these people say by making fun of their ideas so they don’t have to actually refute them. If that doesn’t work, they can explain how the conspiracy would be too involved or that someone would give away the secret or that the powers that be “would just never do anything that terrible.” Failing that they can resort to putting their hands over their ears and singing, la la la la la la la la until their opponents go away.
But there’s another way touted enthusiastically by believers of official stories. That is to invoke the dreaded Occam’s Razor, which most people take as being “the simpler of two END_OF_DOCUMENT_TOKEN_TO_BE_REPLACED 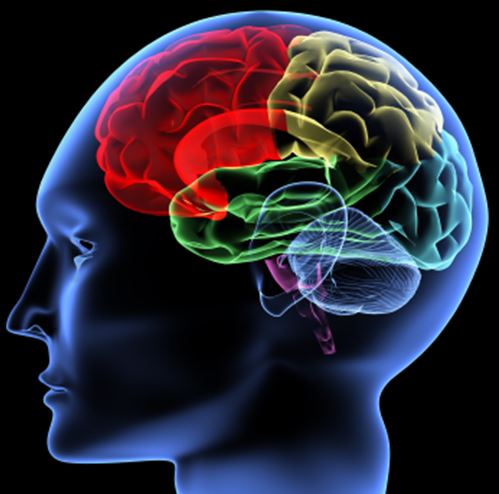 The human brain is a fascinating thing. It controls everything we perceive. It is the vehicle through which all information passes, the filter through which all external events are processed. We can use it to search for the truth, but it can also stop us from looking.
We believe that any opinion we might have is based simply on our understanding of the facts. Sure we all have our biases, but we’re aware of them, right?
Not necessarily. We may be aware of the obvious ones, but the subtle ways we resist facts presented to us often slip under the radar. The things that motivate us to defend what we END_OF_DOCUMENT_TOKEN_TO_BE_REPLACED 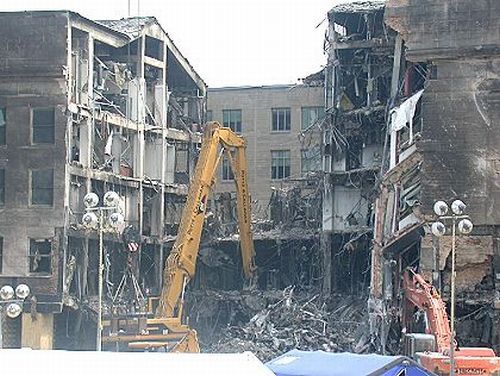 A great deal has been written about the evidence for explosives in the World Trade Center, but not enough attention has been paid to the evidence that bombs were detonated in the Pentagon on Sept. 11, 2001.
As I wrote in my Oct. 2, 2010 post, “How could Flight 77 have caused interior Pentagon damage on 9/11?”, there was a great deal more damage done to the interior of the Pentagon than a plane impact could account for – or any impact from the outside for that matter.
We know that the government’s conspiracy theory states that American Airlines Flight 77 penetrated the Pentagon at roughly a 45-degree angle and managed to go through three rings of the Pentagon, punching a round exit hole in the inside wall of the C Ring END_OF_DOCUMENT_TOKEN_TO_BE_REPLACED