At the Pentagon on 9/11, the plane did not fit the hole, there was no wreckage of a large plane outside the hole, and the lawn that should have been dug up by the engines was pristine. How stupid do they think we are?
My view of what happened at the Pentagon on 9/11 is influenced by my background in aerospace and the fact that I used to work in the very part of the building that was destroyed. Fortunately for me, I was no longer working there on September 11, 2001, or I might not be typing this now.
The first thing that is important to know is that security in the Pentagon is exceptionally tight. One day when I was working there, I did something with a package that someone thought was suspicious. Within less than a minute a man was at my side to investigate me. I showed him my credentials and explained what I was doing. He thanked me and left. He was very polite and courteous. The point of this is that there are video cameras all over the Pentagon and surrounding area. They watch and record everything, as would be expected in a highly secure area.
If an actual 757 had hit the Pentagon on 9/11, we would have been shown videos of it hitting the Pentagon.  These videos would be shown ad nauseam on the controlled news stations just like the planes hitting the Twin Towers. I think the reason they will not show the videos is that they would not show a 757 airliner, and their official story would crumble. (If I have to guess, I would say the photographic evidence is consistent with a cruise missile with a carbon fiber composite fuselage – but it is clearly not a 757, as I explain below.) After all these years and an FOIA request and legal suit by Judicial Watch, the FBI still will not release the videos. Why did a federal judge allow the FBI to commit this apparent crime of obstruction of justice?
When I worked in aerospace, I looked at many pictures of aircraft crash sites, more than I can count. When you look at an aircraft crash site you will usually see the engines and the tail section. Twin-engine aircraft (one engine under each wing) have a design requirement that the aircraft can operate on only one engine. This is so that if one engine stops working, the pilot can navigate to the closest airport and land safely. This sometimes happens. This design requirement drives two design features:

If a 757 really did fly into the Pentagon, the pictures would show the remnants of two large engines with corresponding holes in the building and evidence of damage from the large tail section.
I believe the evidence is inconsistent with a large 757 with an aluminum fuselage hitting the Pentagon on 9/11. How could an enormous plane hit the Pentagon and not produce an enormous amount of plane wreckage or holes consistent with the two engines? I suspect, but cannot prove, that some of what appears to be remnants of an aluminum fuselage may have been planted. Unlike a 757 mechanic, I do not have the knowledge to determine if the pictures from the crash site show wreckage of a 757 or a different aircraft.
The lawn:
When you design aircraft, it is desirable to make the center of mass lower than the center of lift. This increases flight stability. This is a part of a design goal that the plane should fly straight and level in the event of a control failure of control surfaces due to a loss of hydraulic pressure. An engine is a very heavy component of a plane. This is why they always try to locate the engines as low as possible in relation to the wings. The engines of a 757 are located low for this reason. If you land with the landing gear up, the engines will hit the ground. The pictures of the Pentagon alleged crash site show a pristine lawn. It appears that a 757 with the landing gear up did not crash land on that lawn.
Pentagon topography changes:
It might be helpful to use something like Google maps to understand the following. The Pentagon is divided into five wedges. When I worked in the Pentagon (in Wedge 1), I would often walk on the sidewalk along the west side of the building. On a spring or fall morning with the birds singing, it could be a pleasant walk. Wedge 1 was where the “flying object” is alleged to have hit on 9/11. When on that sidewalk, I used to sometimes stop and watch a Blackhawk helicopter land at the heliport, where the 9/11 Memorial is today. If I had been on that sidewalk during the morning of 9/11, I might have been killed.
The sidewalk was separated from the building by a flat and level lawn. On this lawn were the heliport and the small control tower. There was a small chain-link fence about 40 inches high on the edge of this lawn next to the sidewalk. 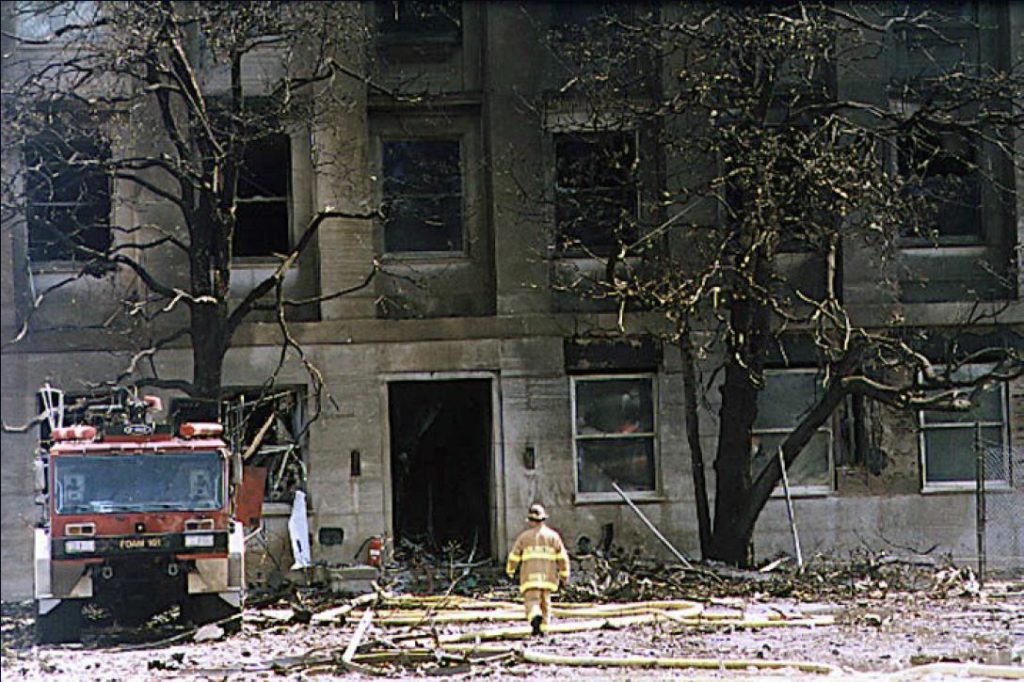 This shows the level of the floor of the building’s first floor in comparison to the level of lawn that would have been dug up by the engines of a 757 hitting the first floor.

If you visit that part of the Pentagon now, you will notice that they have removed much dirt from that area of the building. It would be much easier to walk from south parking to the west side of the building now, because there is no longer that steep hill. It is a more gradual slope. If you are outside the exterior wall now, your feet would be much lower than the feet of someone standing inside the building.
The point of this is that the changes to the topography near Wedge 1 seem to be a part of the cover-up.  This was probably done because without these changes to the topography, the physical impossibility of the official story would be more obvious to more people. If the nose of a Boeing 757 hit the first floor, the engines would have gouged ruts in the lawn. The pictures show a pristine lawn. That is why they had to remove the dirt to lower the level of the lawn outside the building. I would guess the contractors who removed that dirt did not know the real reason for their job. (It is also worth noting, perhaps, that the Navy Annex and Citgo station have been torn down, which further changes aspects of the Pentagon surroundings that came into play on 9/11.)
Eyewitnesses:
One of the principles of running a disinformation campaign is that it is necessary to get your idea into the public’s mind as early as possible. This is because ideas have stickiness. Once a person gets an idea into his or her head, it becomes difficult to change their mind. Eyewitness accounts are used for this purpose. We can assume there were “disinformation agents” posing as “eyewitnesses” in the 9/11 operation. Having worked in aerospace, I think it would be difficult to accurately identify, from a distance and in just a few seconds, an unexpected 757 traveling around 400 miles per hour.
Many of us see evidence of a multi-threaded disinformation campaign waged for the purpose of muddying the waters about the Pentagon in order to create as much confusion as possible. (And many suspect the large-plane-impact hypothesis at the Pentagon is a part of this.)  This is an old CIA tactic. For this reason, we should be hesitant to accept any information from any eyewitness.
Disinformation campaigns, like the one at the Pentagon, have telltale characteristics. Most have at their core one or more absurdities; this is how you know it is a disinformation campaign. They try to use a trusted source, so the public will believe the false information. They use multiple sources and repetition to bombard the public from all directions. Sometimes they insert nuggets of truth to gain credibility. The people delivering the information seem to be too smart to believe what they are telling you. They will never renounce their story and will use the technique of ridicule against anyone who disagrees with them. Trying to argue with these people is a waste of time.
We may never know exactly what happened at the Pentagon that day because the cover-up has kept much evidence from being seen and studied. But one thing is very clear: the evidence contradicts the claim of a 757 impact with the building, and therefore the official story cannot be true.