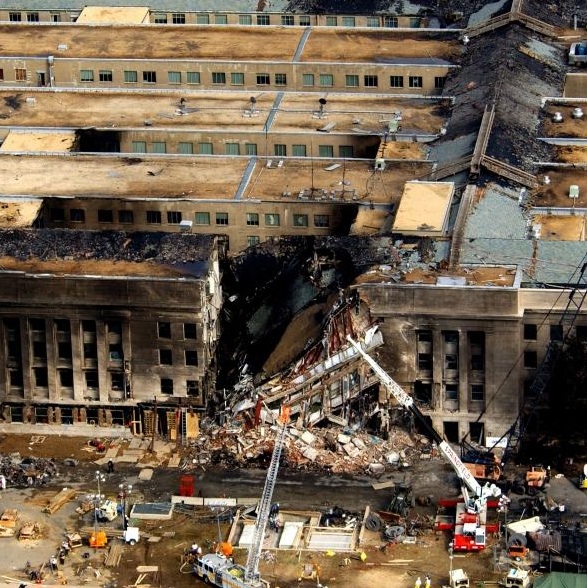 The government and the media have told us that a Boeing 757 airliner hit the Pentagon at nearly 9:38 a.m. on Sept. 11, 2001.
But we know it didn’t.
For the Pentagon to have been hit at by the allegedly hijacked American Airlines Flight 77, the laws of physics would have to have been repealed. Admittedly, it wouldn’t be the only time that this appears to have happened that day.
I believe that any reasonable person who is willing to look at the evidence (photo and otherwise) will have to conclude that there was not enough damage to the Pentagon for it to have been hit by a Boeing 757. Not enough damage to the building but apparently enough to vaporize the plane.
There are many elements of the official Flight 77 story that need to be picked apart. These include the inexplicable failure of air defenses, questions about the flying skills of the alleged hijackers, and why the hijackers names did not appear on any 9/11 passenger lists. In this post, we’ll start with the physical evidence.
According to Boeing’s own web site, the 757 is 155 feet, 3 inches long. It has a wing span of 124 feet, 10 inches. And it is 44 feet, six inches high at the tail. It has a capacity of 11,276 American gallons of jet fuel. Its maximum takeoff weight is 255,000 pounds. It can reach Mach 0.8 (just over 600 mph) and has a seating capacity that can range from 186 to 239 passengers. On Sept. 11, it had just 58 passengers and six crew members on board.

Flight 77 took off from Washington Dulles International Airport near Washington D.C. bound for Los Angeles at 8:20 a.m. – 10 minutes late. It is supposed to
have remained airborne for one hour and 20 minutes before crashing into the Pentagon.
It is alleged that the hijacking took place shortly before 8:56 a.m. because that’s when the plane’s transponder was switched off. Incredibly, the plane flew around the northeast United States – on a morning when both World Trade Center towers had been hit by supposedly hijacked aircraft – for nearly 45 minutes without fighter jets making any effort to intercept it. Jets were scrambled four minutes before it supposedly crashed but they were sent out to the Atlantic Ocean. At the time of the alleged crash, they were farther away than they had been when they took off.
But I’m getting ahead of myself. I want to start with the crash scene.
According to the story, after leaving radar and remaining out of contact for some time, the plane reappeared as it approached Washington. But alleged hijacker Hani Hanjour, who had supposedly taken over control of the plane, didn’t fly straight at the Pentagon. Instead, we’re told that he initiated a 330-degree loop and hit the building on the other side.
The plane is alleged to have hit a newly renovated and reinforced part of the building that had only minimal staff present. Had any other part of the building been hit, thousands would have been killed. As it was, the death toll in the building was 125.
The hole created in the outer ring of the Pentagon by the supposed impact was less than 20 feet in diameter on the second floor with an uninterrupted opening about 50 feet across at ground level, which is more like 80 when you include partially intact columns. The upper floors, which should have been hit by the tail section of the plane remained intact. Most windows were not even broken, although the upper floors did collapse about 20 minutes after the crash. 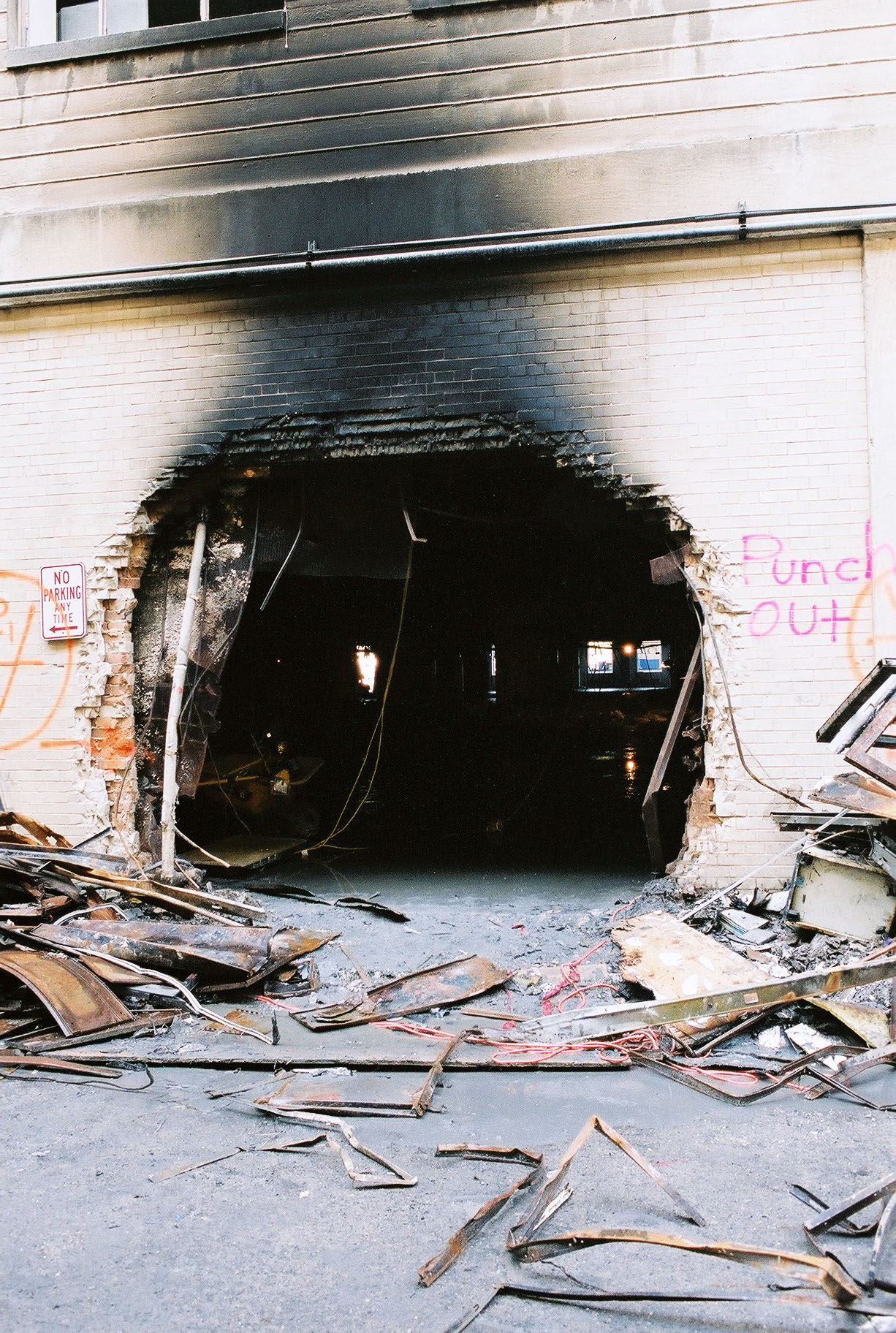 The inside or C ring hole: notice no damage to floor?

The opening in the building is simply not wide enough to accommodate a plane with a nearly 125-foot wingspan (As Massimo Mazzucco points out in September 11: The New Pearl Harbor, the plane is supposed to have hit at a roughly 42-degree angle, which would have extended the width of the contact between the plane and the wall from 124 feet to 160 feet). There was no damage to the grass, which should have been gouged by the engines dragging on the ground.
All of this is physically impossible, plain and simple. The wings of a 757 can’t hit a concrete building at more than 500 mph without leaving a mark. And they certainly won’t be vaporized by exploding jet fuel.
There is NOT ONE piece of wreckage that has been positively tied to Flight 77. The engines, virtually indestructible, were not recovered, although it is claimed that an engine “core” was from one of the 757 engines. There were no bodies, no seats, no pieces of luggage. There were a couple of pieces of fuselage but they were big enough that one person could pick them up. There’s no proof it came from that plane.
Are you still willing to buy the idea that the plane was incinerated in the explosion? Can the energy exist to blow a plane into small bits of metal while simultaneously penetrating 310 feet into the Pentagon? The problem there is that photos of the damaged Pentagon clearly show offices with their side wall sheared off. Visible are wooden desks with computers on them and other office furniture. There’s even a wooden stool with an open book sitting on top of it just a foot or two from the ripped off wall. The heat was intense enough to vaporize the plane but not hot enough to set office furniture or books on fire.
The thing that seals the deal for me is just looking at the photos. Keep in mind the dimensions of the plane. And the opening in the building was about 75 feet wide after the upper floors collapsed, and about 90 feet at ground level (less than 20 where the fuselage would have hit).
Oh, I almost forgot. The Pentagon, one of the most secure buildings in the world, was hit supposedly without one clear image being captured on a security camera. According to the Washington Times, the heli-pad, which is very near where the impact happened, is under 24-hour surveillance. They also report that the FBI has admitted it has 83 different videos of the crash. But all that has been released are five non-sequential frames that are totally inconclusive.
The Times also reported that the FBI confiscated footage recorded by cameras at a nearby Sheraton hotel, and from the Citgo gas station right across the street within minutes of the crash. The gas station attendant told the newspaper that the video footage would surely have shown the impact.

If you can’t answer at least these four questions (and there are many others one could add to this list), then you’re well on your way to doubting the official story. Look at the photos and make up your own mind…

Here are some other articles I’ve written that might be of interest to those wanting to better understand why the faked plane crash at the Pentagon proves that 9/11 was an inside job.—Craig McKee
Doctored Pentagon video proves 9/11 cover-up and inside job
More absurd arguments on the Pentagon: ‘Propaganda Team’ sets its sights on Griffin
Going full debunker: Chandler devotes most of Pentagon talk to boosting 9/11 official story
Taxi driver comes close to admitting he was part of 9/11 cover story
Aerial illusion: Facts support 757 flying over and not into the Pentagon on 9/11
Pentagon debates expose emptiness of large-plane-impact scenario
How could Flight 77 have caused bizarre pattern of interior Pentagon damage on 9/11?
Why ‘hijackers into the Pentagon’ story can’t fly
Flight 77 missed the Pentagon: Flight Data Recorder
Griffin’s no-plane-hit-the-Pentagon arguments eclipse consensus approach
Missing wings at the Pentagon: study says they’d have snapped off, not folded in
Jenkins misleads by linking Pentagon plane-impact theory to AE911Truth
Win converts using these plane-hit-the-Pentagon talking points: just keep repeating ‘It’s so divisive!’
David Ray Griffin, Barrie Zwicker support CIT’s ‘staged evidence’ scenario
Evidence points to bombs inside the Pentagon on 9/11