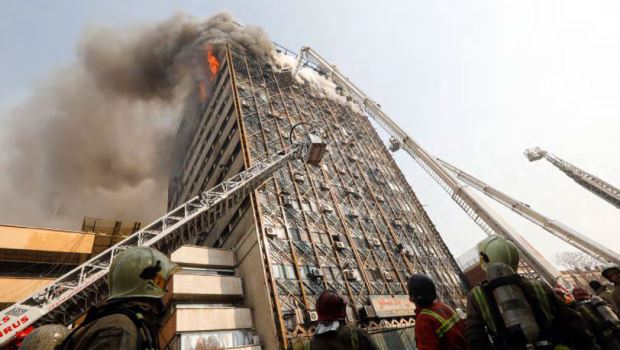 The similarities to what happened at the World Trade Center on 9/11 are undeniable.
At about 11:20 a.m. local time on Jan. 19, 2017, the 15-story Plasco Building in Tehran, Iran (17 stories if you include two floors underground), fell into a pile of rubble after being on fire for about three hours. Twenty-six died, including 16 firefighters, while 500 businesses lost much or all of their property and 3,000 employees were directly affected. (As is pointed out by an alert reader in the comments below, the date, Jan. 19, is the reverse of 911. I think it is very unlikely that this is a coincidence.)
There were reports of explosions in the building after firefighters believed they had extinguished the fire. These explosions can be clearly seen in videos. The scene looked similar—although not identical—to aspects of the destruction of the three WTC towers on 9/11. And according to a new report called “The Plasco Building Collapse in Tehran: A Preliminary Assessment,” just released by Architects & Engineers for 9/11 Truth, the cause of this building destruction may very well be the same as with the WTC towers—controlled demolition.

One especially intriguing fact included in the Feb. 20 report is that—as with all three WTC towers—molten metal was found in the rubble of the Tehran building. This raises the possibility that thermite might have been used, as AE911Truth contends was the case on 9/11.
“Controlled demolitions are usually accomplished without the use of incendiaries. However, in a situation where the goal is to conceal a controlled demolition, thermite would serve the purpose of weakening support columns and structural joints, allowing for the minimal use of explosives and, therefore, minimal noise generation.” (AE911Truth’s” Plasco Building Collapse” report, p.13)
The report goes on to explain that fire can’t account for the presence of molten metal:
“At this time, there appears to be no plausible fire-related scenario where large amounts of molten metal found in the debris could have been created during or after the incident.” (p.15)
Within a day of the Iran event, AE911Truth had issued a statement urging the Iranian authorities not to rush to judgment on what caused the “collapse.” With the new report, the organization makes it clear that controlled demolition is most likely to have caused the collapse.
“Based on the data we have collected and analyzed over the past month, we can now recommend with a high degree of confidence that investigators should consider controlled demolition involving a combination of explosives and incendiaries as the most likely hypothesis for the Plasco Building’s destruction.” (p.2)
So, to be clear, the report is not stating that this was definitely a controlled demolition, but it is stating that this possible cause should be considered by investigators as the most likely hypothesis. And if explosives were used, this from the report might naturally follow:
“Under such a scenario, the fires that started at around 8:00 AM would have been set intentionally to create the false appearance that the building came down as a result of those fires.”
The report recommends that investigators in Iran follow the National Fire Prevention Association’s Guide for Fire and Explosion Investigations (called NFPA 921), which is the national guide for fire and explosion investigations in the United States. Further it recommends that interviews be conducted of those who had access to the building before the event.
“NFPA 921 advises that an early task in the initial assessment of a fire or explosion incident is to determine whether the incident was a fire, an explosion, or both. Based on eyewitness accounts, as well as subsequent public discourse in Iran concerning the cause of reported explosions, we have determined it was a fire and explosion incident.” (p.8)

The Plasco Building was on fire for about three hours.

Kamani also described larger explosions closer to the building’s destruction: “I can’t remember clearly, but after the white smoke started coming out, there was a massive explosion to the point that it shook me.”
Fire Department spokesman Jalal Maleki  said, “Everything was under control, then all of a sudden, and unexpectedly, two or three explosions took place in the upper floors at intervals of two or three minutes.”
Maleki also states that the first major explosion caused the “massive destruction” of the building’s windows.
The AE911Truth report notes that any hypothesis that seeks to explain the building’s destruction must explain these explosions, which were felt by firefighters both inside and outside the building.
“Within one to two seconds after the final large, audible explosion event that emanated from the south face around the 11th floor, other apparent explosions began to emanate from various parts of the building as it underwent total collapse.
“Video taken from the southeast (Figure 7) shows two energetic plumes rapidly emanating from the south and east faces approximately two seconds before the roof began to cave in along the south face. Then, just as the roof began to cave in, we see two series of expulsions run down the eastern side of the south face and down the middle of the east face, roughly below where the first energetic plumes occurred.” (p.11)
Iran’s Interior Minister, Abdolreza Rahmani Fazli, has been quoted as saying the fire started as the result of an “electric short­circuit” although an expert commission has been formed to investigate the complete destruction of the building. AE911Truth’s report praises the make-up of the commission which includes “seven apparently-renowned engineers, a political scientist, a lawyer/political scientist, and an insurance expert.”
Finally, the report also calls on investigators not to reach conclusions until the facts are in.
“As we noted in our January 20 statement, it is often much more difficult to ascertain the truth of an event after an explanation for that event has been prematurely formed. We therefore urge the commission and the people of Iran to be fearless and vigilant in their search for the truth about this national tragedy that took the lives of 26 individuals.” (p.16)