It’s an inspired move. Take a single event from 9/11 and ask for a local investigation to determine how it happened. In this case, the goal is to have officials in New York City launch an investigation into why World Trade Center Building 7 collapsed on Sept. 11, 2001.
The smaller scope makes it more likely to succeed, and the fact that New Yorkers are asking their city to investigate leaves the federal government out of it – for now, anyway. And it’s clear that other so-called investigations into this event have shed no light on how this 47-storey building came straight down at near free fall speed (6.5 seconds) when it wasn’t even hit by a plane.
The campaign, called Building What?, was organized by families of people who died in the Sept. 11 attacks. It is co-sponsored by NYC Coalition for Accountability Now and Architects and Engineers for 9/11 Truth, an organization that includes more than 1,200 members. AE911Truth is devoted to the dissemination of scientific evidence about what happened on 9/11. Their stated goal is a truly END_OF_DOCUMENT_TOKEN_TO_BE_REPLACED 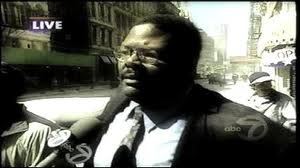 The destruction of World Trade Center Building 7 is still unknown to most members of the general public. But there is someone who was there – and who told his story.
He was Barry Jennings, the emergency co-ordinator for New York City’s housing authority. He almost died in Building 7 – from explosions that came from below him as he climbed down to the sixth floor. Oh, and the explosions started before either of the twin towers came down.
Jennings did pass away in 2008 – supposedly of cancer – although some are suspicious of this. Jennings death occurred just two days before the release of the NIST report on the collapse of Building 7. And he had apparently told co-workers that he had been threatened that he would lose his job or his pension if END_OF_DOCUMENT_TOKEN_TO_BE_REPLACED