By Craig McKee
The first time I walked into the offices of my university newspaper to offer my services, I noticed a slogan on the wall that read: “Don’t cover the news, UNcover it.”
That distinction appealed to every idealistic bone in my body. There were 206 of them then, give or take. Things have settled a bit since, but I’m still idealistic to a fault. Even so, my expectations of the mainstream media – at least when it comes to the big picture items – can’t get much lower.
Instead of uncovering the news, now I’d settle for: “Don’t cover it up.” END_OF_DOCUMENT_TOKEN_TO_BE_REPLACED 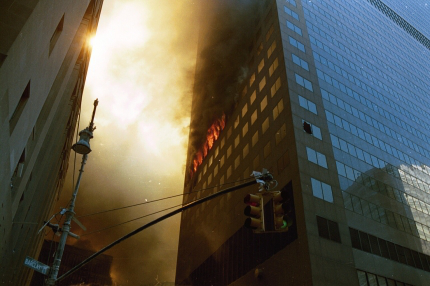 Shortly before 5 p.m. on Sept. 11, 2001, BBC World reporter Jane Standley told a TV audience that World Trade Center Building 7 had just collapsed, the third WTC building to fall that day as the result of supposed terrorist attacks.
The problem was that the 47-storey office tower was still clearly visible over her left shoulder during the entire live report. Roughly 23 minutes after this “mistake” the building actually did fall. How did the BBC know this would happen? Where did the premature report of the destruction of the building come from?
While the BBC has claimed that it was simply an error, they have made no effort to provide the public with the source of their information (Standley says she doesn’t remember what she said on camera). It is also interesting that Standley’s video feed broke up at around 5:14 p.m., sparing us the site of the END_OF_DOCUMENT_TOKEN_TO_BE_REPLACED