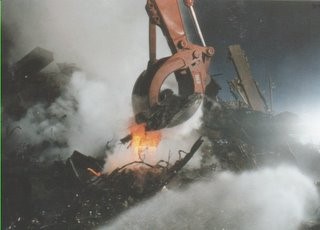 When they can’t explain it, they do the next best thing.
They ignore it.
The U.S. government, the 9/11 Commission, the National Institute of Standards and Technology, FEMA and the mainstream media all do the same thing.  When they can’t explain something that contradicts the official version of events on 9/11, they simply pretend the questions don’t exist.
Among the most crucial examples of this are the large pools of molten metal found under the rubble of the two twin towers of the World Trade Center and Building 7. The molten metal burned under the rubble for weeks, with the final fires not being extinguished until December of 2001, three months after the disaster.
The official story can’t explain this; it doesn’t even try. That’s because the molten metal points to a controlled demolition – explosive charges combined with a material that causes a chemical reaction creating extreme heat to cut through steel beams. 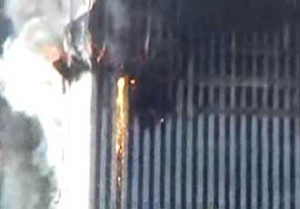 According to Brigham Young University physics professor Steven Jones, who has questioned the science of the official story, the most likely material to have been used to melt through the beams is thermite.
Thermite devices could have been wrapped around the steel girders diagonally to cut through them. They could have contributed, along with the explosives, to bringing the structure down. When ignited, thermite can reach temperatures of 4,500F in less than two seconds.
One of the by-products of the use of thermite is molten steel. Another is aluminum oxide, which shows itself as a fine white smoke. What did we have in the wake of the towers’ collapse? Molten steel and fine white “smoke.” There was so much of this smoke that it could be seen from the International Space Station.
FEMA, the Federal Emergency Management Agency, stated in its report made it that most of the jet fuel from the planes would have burned up in the initial impact or in the first minutes after impact.
So what was all that smoke coming from the towers and later the wreckage of the towers? Smoke poured out of the rubble for weeks as emergency workers attempted to extinguish the molten metal fires underneath.
The melting point for steel is about 2,800F while the maximum temperature that jet fuel can burn at is about 1,800F. Experts like Jones have pointed out that the black smoke coming from the towers indicates that the fire was oxygen starved and therefore was burning at a much lower temperature even than 1,800F.
How do we know the molten metal didn’t come from some underground source? We know this because there are photographs that clearly show molten metal flowing from the 81st floor of the South Tower BEFORE collapse. Some have tried to explain this by saying that it is molten aluminum from the planes.
Aluminum may glow at a high enough temperature but it’s ridiculous to suggest that aluminum burned underground for three months. Molten metal was found under Building 7, which was not hit by a plane. Those of you who refuse to consider the “demolition” possibility might want to try and explain where this molten metal came from.
By the way, the existence of these “hot spots” under all three buildings was confirmed by aerial thermal images taken by NASA in the first two weeks after 9/11.
As for proving that the molten steel was actually there, photographs show it, and even then New York Mayor Rudy Giuliani talked about it publicly. He talked about how the boots of emergency workers would melt after a few hours of clearing rubble.
Many other witnesses reported the presence of the molten pools under the building rubble. Leslie Robertson, one of the designers of the World Trade Center, reported molten metal running under the buildings 21 days after 9/11.
Public health adviser Ron Burger likened the pools to a volcano. Other workers say it looked like a foundry or that the metal “looked like lava.” Witnesses say they saw molten steel “dripping from beams and walls” in the basement of the towers. New York firefighters referred to “rivers of molten metal” under the rubble.
SOMEONE NEEDS TO EXPLAIN THIS.
The FEMA report also mentions sulphur residue on the steel beams of the towers after collapse. This also supports the controlled demolition theory because sulphur is used to lower the melting point of the steel. Sulphur combined with thermite creates thermate. This dramatically speeds up the melting of the steel.
If there’s a reasonable explanation for all of this, why haven’t we heard it? And if you’re wondering if the whole controlled demolition case might all rest on this, you can be assured it’s not.
It’s just the beginning.

Notice the beam that appears to have been cut diagonally.